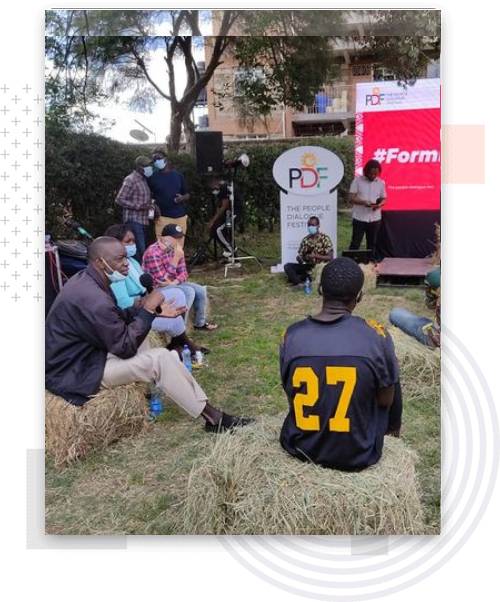 In 2019, CMD-Kenya initiated the People Dialogue Festival (PDF) – a multiparty and a multi-actor dialogue platform on governance issues in Kenya. The inaugural event was held on 7th, 8th & 9th March, 2019 in Nairobi while a second PDF was held on 5th to 7th March, 2020. Due to the challenges of COVID-19 and the attendant restrictions of holding physical meetings, CMD-Kenya convened a hybrid mini-PDF on September 15 – 16, 2021 in Nairobi Kenya.

The concept of PDF mirrors democracy festivals organized in the Nordic-Baltic Sea region, which provide opportunity for citizens and leaders to meet eye-to-eye and on level terms to dialogue about issues facing their countries.

PDF in Kenya is premised on an understanding that democracy is more than democratic institutions and written rules. It is a culture that has to be nourished through the creation of spaces and platforms where people can physically get together, talk to each other, get inspired, exchange opinions and debate their ideas. PDF aims at providing a platform where the common man, youth, activists, leaders, academia, artists and activists, policy makers, private sector thought leaders and development practitioners, at large, all committed global friends of Kenya converge to collectively explore practical ways of understanding and appreciating each other’s role in, and deepening their contribution to, social and sustainable development, climate justice, amplifying vital voices, freedom of expression and democracy in its various manifestations.

It provides a rare opportunity to foster active civic engagement, a culture of dialogue and critical thinking on a range of governance, social and economic issues by bringing together people of different trades and backgrounds.

Why Should You Attend?

These are the reasons why....

In a stratified society such as Kenya coupled with increasing skepticism for politics, the urgency to create a stronger and more transparent connection between decision makers and decision takers cannot be gainsaid. Dialogue serves this key connection by ensuring active and meaningful engagement of different actors and citizens in public affairs. Indeed, dialogue is the distinguishing feature of democratic societies, which are judged by the extent to which governments open up to citizen involvement in public affairs and the space they give for citizens to hold the government accountable. The challenge is therefore to establish spaces for dialogue among state and non-state actors as well as ordinary citizens to strengthen their relationships towards the overall good of the country’s democratic development and the transformation towards sustainable development.

Moreover, for Kenya to begin emerging from the present and historical state of affairs that makes it increasingly vulnerable, there is the need for greater collaboration among leaders both in public and private sectors, to deal with the underlying issues, develop answers to problems and move the country
forward on a positive path of sustainable peace and development. A contrary path threatens to erase strides of development and may further entrench poverty and inequality especially among young people  who make up a high percentage of the total Kenya’s population. Collaborative national leadership will stimulate dialogue at different levels of the society on ways to achieve more effective and holistic strategies for managing and resolving differences and building inclusive processes that advance good governance in the country.

While PDF is an established people-centered national dialogue platform, there is need for broadening the scope to ensure that dialogue is, sustained, inclusive and issue-based. Involvement of various stakeholders at different levels will enhance the sustainability of dialogue and actioning on the deliberations especially as the country gears toward a General Elections and transition in August 2022

The overall objective of the People Dialogue Festival is to provide a platform for a balanced, inclusive and effective national dialogue on governance and development agenda and promote the institutionalization of implementation of dialogue outcomes.

Specifically, the PDF in March 2022 shall aim at achieving the following objectives:

1. To provide opportunity for reasoned arguments that link national dialogue with other political processes particularly the 2022 general elections.

2. To highlight the Decade of Action Campaign and secure duty bearers’ and citizens’ commitments at a national level, to accelerate SDGs processes.

The overarching theme of the PDF 2022 will be underpinned by a theme namely: Collaboration and Competition in Democratic Development. The approach of the dialogue will be based on co-creation in both content and format. We consider co-creation a philosophy, tool and a method. However, the COVID-19 pandemic continues to pose challenges hence the need for adaptability and flexibility to organize the event. This is in a bid to strike the delicate balance between protecting public health and safeguarding the democratic space. The key topics that shall form the core of the dialogue scheduled are as follows:

Towards Electoral Accountability and Stable Political Environment in Kenya in 2022

The greatest paradox in the consolidation of electoral democracy in Kenya remains the deficit between the progressive constitution enacted in 2010, and the quality and credibility of elections expected to be held under it. The 2010 Constitution created a new legal and institutional framework for managing elections that was intended to guarantee a credible process; (characterized by high levels of accountability and transparency, including built in mechanisms to enhance inclusion and participation of all citizens, with special protections to safeguard political gains made by women, youth and minority groups, prescribed mechanisms to prevent political and elite interference in the form of independent public institutions, strong governance and oversight agencies, and a robust election dispute resolution system designed to protect the political rights of all Kenyans). As part of the implementation of the new constitution, parliament in 2011 enacted the election sector laws and established a new institutional framework and mechanism for enhancing the participation of women and youth in the electoral process. However, the ensuing elections continue to experience challenges, contestations amongst the players and dissatisfaction amongst the general populace on the ability to deliver inclusivity, accountability and transparency. In August 2022, the country will head to its 3rd elections under the Constitution of Kenya 2010. Key political leaders will be invited to use the opportunity provided by the PDF to discuss and commit to observing free and fair elections. In particular, political leaders will commit in public to observe the Digital Code of Conduct, Internal Dispute Resolution (IDRM) Guidelines for political parties as well as the Nomination Strategy for Gender Equality all being formulated by CMD-Kenya. Citizens and EMBs will deliberate on the recurrent puzzle: “Why electoral reforms post 2010 constitutional dispensation, have failed to deliver elections that have integrity?”.

Ahead of Kenya’s 2022 general elections, there is need to discuss threats to the elections emanating from the digital space, and to identify and develop appropriate responses. A key challenge is the online behavior and actions of candidates and political parties, including the creation or dissemination of disinformation and hateful content; coordinated attacks on the credibility of institutions such as the electoral management bodies, civil society organisations or observer groups; gender-based online violence against female candidates and journalists, as well as attacks against other journalists and media outlets. Political goodwill is vital in ensuring that there will be significant repercussions for misbehaviour online, especially in the absence of the necessary mechanisms within political parties that could deter party members from engaging in toxic online behaviour. Therefore, PDF will provide an opportunity to dialogue with and have political parties and candidates adopt a pledge, with the aim of limiting the propagation of hate speech and disinformation, including gender-based attacks and intimidation, ahead of the August elections. This will result in a safer social media space that allows for quality political dialogue and protects internet and social media users, especially women and youth.

Polarization has long been a feature of Kenyan politics, where ethnic, religious, and other identity-based divisions have driven episodic violence, especially around elections. It is evident in how political leaders have gained power by appealing to their ethnic communities with promises of jobs and services. Although IEBC and PPDT are tasked with addressing and mediating inter-party disputes and the ORPP is tasked with providing oversight over party activities and has some investigative powers, many Kenyans and especially parties regard the IEBC as being biased, meanwhile the PPDT’s mandate does not cover electoral violence, and the ORPP lacks resources to facilitate effective oversight and inter-party dialogues at a grassroots level. To address this, a platform will be provided during the PDF 2022 for parties and other actors to collaboratively discuss vulnerabilities to violence and proactively resolve disputes in conjunction with government officials and community leaders as they arise before, during and after the 2022 general elections.

The “whole of government” and “whole of society” approach and institutionalized stakeholder engagement in the implementation of the global development goals in Kenya provides an unrivaled avenue to ensure the dialogue is focused on issues, which address the major development challenges faced by people in Kenya and around the world. Furthermore, it compels a recalibration of Kenya’s political discourse shifting away from personality based and ethnic political mobilization to a contest of propositions to resolving issues affecting the society. Through multi stakeholder engagement at the People Dialogue Festival (PDF), a focus on SDGs will seek to accelerate implementation, monitoring and review of Sustainable Development Goals (SDGs) in line with the aspiration of the Decade of Action. The discussions will also enhance local ownership and political commitment to accelerating SDGs implementation in Kenya. In this session, participants will interact with high-ranking policy makers and implementers of SDGS in Kenya Government, Private Sector, Academia, Experts and Diplomats as they have their take on how the SGDs agenda is shaping or aiding Kenya’s development agenda. It will also provide opportunity for different players to agree on how partnerships can be nurtured towards realization of the SDGs locally.

Globally, youth have a big stake on the SDGs and if left out, the journey for achieving the Global Goals will be longer than expected. The Kenyan population is predominantly young. However, young people have historically been excluded from decision making in both government and any key areas of national interest in the country. This has resulted in a relatively largely unemployed young population that even though educated, lacks the appropriate tools to effectively contribute to the development of this nation. The policy framework on youth inclusion is robust, however, the implementation is poor. In order to harness the youth voice in the implementation of the SDGs in Kenya, the session will bring together in and out of school youth as well as policy makers so that young people better understand the SDGs, but more importantly, develop strong Youth-adult partnerships in all sustainable development programs that eventually lead to attainment of SDGs at all levels from village (community), national and global.

As a platform for constructive multistakeholder dialogue cutting across age, gender and hierarchy, PDF continues to make a positive impact on Kenya’s democracy, governance, sustainable peace and development. Briefly, this impact includes: